Early in the development of semi-permeable membranes for water treatment, the need to estimate membrane fouling potential of the raw water was found to be essential to identify need for pretreatment. On some water, membranes could treat tens of thousands of gallons before requiring cleaning while on others, filtration of a few thousand gallons plugged the membranes. Attempts to correlate fouling propensity of water with turbidity was only slightly successful. A test, called silt density index testing (SDI test) was developed which better correlates the “silt” or solids in water with membrane fouling tendency.

Oftentimes water with very low turbidity (e.g., < 0.5 Nephloturbidimetric Units or NTU) still causes unacceptable membrane fouling, due to the presence of many particles having very small diameter (typically under 3 microns in diameter) which do not efficiently reflect light to show up as higher turbidity. Nonetheless, these small particles can quickly foul spiral wound RO membranes. Sources of silt can include organic colloids, iron corrosion products, precipitated iron hydroxide, algae, and fine particulate matter.

The SDI test entails forcing water through a small diameter (47 mm), 0.45-micron absolute membrane filter while maintaining a pressure of 30 psi. The time required to pass 500 mls at the end of 5, 10, and 15 mins is taken and used to calculate the unit-less SDI value. The silt density index is calculated as follows: 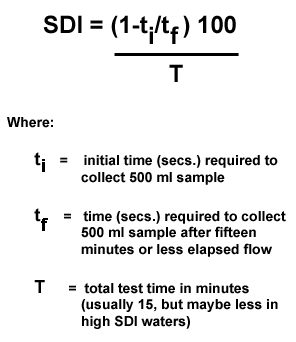 An SDI test less than 3 is generally considered acceptable for membrane operation without pretreatment for silt removal; an SDI value of 3-5 may result in frequent cleaning (quarterly to weekly) while an SDI value greater than 5 typically requires upstream filtration capable of reducing submicron particles.

SDI must be measured on-site, from a sample point close to the proposed location for the RO installation. Our experience has shown sometimes marked difference in SDI between, for example, a QC laboratory in a large manufacturing plant and the proposed installation site. This is probably due to corrosion in old black iron piping often used for process or potable water distribution.