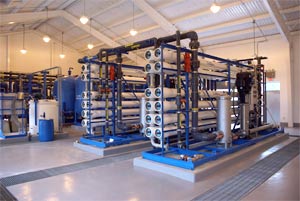 The WaterProfessionals® team was recently enlisted by Uncle Sam and the United States Army, but not in the traditional sense. This time the company was called upon to serve by designing and installing a complete potable water treatment system for the US Army Corps of Engineers at the Fort Stewart Army base in Savannah, GA.

Increased potable water demands required rapid construction of a new water treatment plant on the base. The water treatment system – which has a flowrate of 600-800 gallons per minute – was designed to treat well water to bring it into compliance with EPA drinking water standards. The original design and specifications were based on limited data about the underground aquifer which was believed to underlie the proposed well site on the Ft. Stewart military base.

Key parameters used in the process were as follows: Total dissolved solids (TDS) 1500-2000 ppm; silica 20-25 ppm; alkalinity 100-175 ppm; sulfates 290-320 ppm; total hardness and barium projections were not provided. Since the anticipated TDS level was significantly higher than the secondary EPA drinking water limit of 500 ppm, reverse osmosis was selected as the primary technology. Reverse osmosis utilizes a semi-permeable membrane which allows passage of water molecules but prevents passage (i.e., “rejects”) 96-99% of dissolved minerals or chemicals from passing. These are discharged as wastewater. Typically, 25% of the RO feedwater is discharged as waste while 75% is recovered as “permeate.”

Based on projections about the aquifer, the TDS limit could be met using reverse osmosis to treat approximately 75-85% of the well water and blending it with 15-25% of untreated well water. The blended TDS would be below 500 ppm TDS. However, when the well was drilled, analytical testing following sustained initial pumping showed the following: total hardness of 1,032 ppm (60 gpg), sulfate of 1,160 ppm (as CaCO3) and TDS of 1127 ppm. The unanticipated hardness and sulfate concentrations posed a challenge for reverse osmosis.

Since the RO system membrane allows water to pass while rejecting dissolved minerals, the “dirty” side of the membrane is subjected to the concentrated waste or “brine” which results from 98-99% of the minerals being concentrated into only 25% of the RO feedwater. At this concentration many minerals such as sulfates, due to their very low solubility in water, precipitate and form a scale on the membrane. The design anticipated sulfate concentration of only 290 – 300 ppm which can be controlled using chemical antiscalents. These are non-toxic, typically organic compounds which can be metered into the RO feedwater in low ppm concentration and interfere with the crystallization of insoluble compounds, thus minimizing scaling.

The rapid evolution of antiscalent technology in the last decade has eliminated the need to soften RO feedwater in most applications. Utilization of antiscalent eliminates the capital cost for softeners and the operational cost of salt. However, the sulfate level of 1,160 ppm, combined with hardness of over 1,000 ppm, pushes the outer limits of scale minimization using antiscalents alone. Since scaling results in frequent membrane cleanings and reduced membrane life (the RO membranes in this installation have an estimated replacement cost of $115,200.00), softening 50% of the well water and blending with untreated water upstream of the RO was recommended.

Since the original design did not anticipate this need, and the RO’s had been delivered and installed, the new softener system had to be built to accommodate limited space in the existing water treatment building. Utilizing two large softeners was not an option and adding another building would have been cost prohibitive. A triplex system utilizing three (3) 84-inch diameter softeners, each containing 120 cubic feet of cation exchange resin, were delivered and installed. Since the softeners will consume 10,180 lbs. of salt per day, a 12′ X 21.5′ brine silo was installed as well. The silo allows pneumatic transfer of loose, bulk salt from a semi-trailer of 40,000 lbs. salt at a time. Based on a level control, brine is generated by water sprayed above the salt bed which runs through the salt into a sump at the bottom of the silo. The brine is pumped to the softeners during regeneration.

In order to treat the required 300 gpm continuous and 600 gpm peak flow of RO water, and to allow for some redundancy for the potable water plant, two 300 gpm RO units were installed. Each skid mounted system has 12 RO membrane housings, each containing six (6) 8″ by 40″ thin film composite membranes. Each system has a variable-frequency-drive-controlled 100 horsepower pump capable of pressurizing 400 gpm of water to an average pressure of 263 psi. A control valve regulates pressure through the membranes. The recovery of each RO skid is 75% with a permeate flow of 305 gpm and a waste flow of 100 gpm.

Not only were the specifications exceptionally demanding, but the timeline for installation of the system also imposed extreme constraints. Part of the vendor selection process was based on ability to deliver a complete system within a stringent time frame.

Because the project was already severely behind schedule before the contract was awarded, WaterProfessionals® had less than two weeks to provide complete submittals during the December holidays and a pressing 12-week delivery deadline, which is about half the time a job of that magnitude would ordinarily require.

“The preliminary process required submitting plans stamped by a licensed engineer and generating submittals for review by the Army Corp of Engineers and the State of Georgia with little room for error or revision,” said WaterProfessionals® spokesperson Randy Leathers, Vice President of Industrial Sales. “But a complete package was provided to enable a swift review and contract award, and a fully operational system was up and running right on time – even despite several unexpected logistical problems.”

The actual wells did not begin pumping until after the system had been built, for example, and significant changes were required to meet water quality standards. The new inlet water characteristics contained high hardness, barium, high sulfates and high strontium – and high concentrations of these ions create an extreme scaling issue for reverse osmosis membranes. Antiscalants alone would not prevent the scaling problems, and due to the extremely high hardness levels, softening of the entire stream was not feasible because of the prohibitive salt costs.

WaterProfessionals® recommended a solution that softened 50 percent of the raw water stream to reduce costs while it also lowered concentrations to a level that made antiscalants effective. The original intent to blend raw water with the reverse osmosis permeate may be limited if not abandoned because the well’s high sulfate level limits blending the raw well water to less than 15% of the total flow in order to meet the US EPA drinking water standard of 250 ppm. Even with the sulfates below 250 ppm, sulfate-related odor issues may cause blending to be aesthetically undesirable.

After working with severe time constraints, and a challenging and changing raw water supply – WaterProfessionals® provided a reliable treatment scheme that created a finished well water that meets Federal EPA and State of Georgia standards.