Ion exchange resins are made up of a highly porous, polymeric material that is acid, base and water insoluble. The tiny beads that make up these resins are derived from hydrocarbon and are about ½ millimeter in diameter.

There are two main types of resins used for ion exchange: anion and cation. Within these two types, there are four main classifications of ion exchange resins: 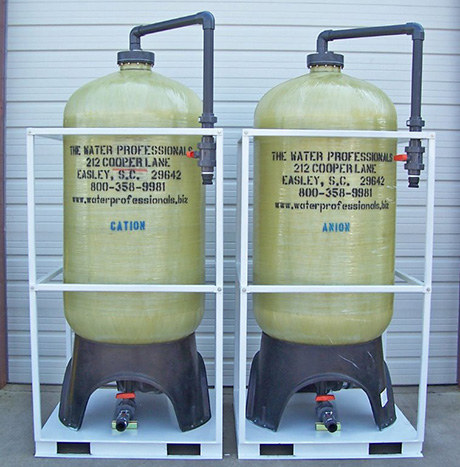 Negatively charged ions are attracted to positively charged anion resins vs. cation resins, which attract positive ions with their negative charge. There are a number of physical and chemical properties to take into consideration when selecting an anion vs. cation resin, and which will help to determine the best resin for your needs, such as:

Cation and anion exchange resins are common and essential components in modern industrial water treatment systems. Source water often contains many dissolved minerals that must be removed lest they wreak havoc on sensitive industrial systems. Small amounts of these minerals can reduce the effectiveness of industrial equipment and contaminate delicate electrical components.

Cation and anion exchange resins can be thought of as powerful magnets that attract and hold the contaminating minerals from the passing source water, by an electromagnetic attraction. Cation resins naturally attract a certain set of minerals, while anion resins attract another set of minerals.

The polymeric resin beads are treated such that they contain thousands of tiny cracks, thus increasing their surface area. As source water passes through the cation and anion resin beads, molecules with minerals are left “clinging” to the many surfaces of the beads. This continues until all the beads are covered in minerals, at which time, the resin must be regenerated, which will flush the minerals out, and return the resin to like-new condition.

Strong base anion resins may be used for demineralization or dealkalization, while weak base anion resins work best for removing acids and organics from water. Anion dealkalizers are primarily used to remove alkalinity from boiler feedwater with a low-to-moderate amount of total dissolved solids (TDS). Anion dealkalizers may also be used to remove carbonate, bicarbonate, sulfates and nitrates from feedwater.

Strong acid cation resins can be used for dealkalization (most commonly in hydrogen form) or for split stream dealkalization. However, both methods of dealkalization require the use of hazardous acids to regenerate resin beds, as well as the use of a degassifier to remove carbon-dioxide created during the treatment process.

Contact WaterProfessionals® for help in specifying a custom ion exchange system for your business!