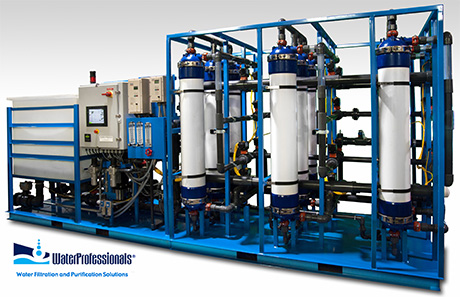 Tower Extrusions, a large aluminum extrusion company located in the drought-stricken city of Olney, Texas, was under extreme pressure to reduce water consumption. The city was experiencing water shortages, with reservoir levels declining by over 90%. Tower Extrusions is one of the city’s largest consumers of fresh water. The owner of the company, a long-time Olney resident, wanted to do what he could to help reduce his company’s water use.

WaterProfessionals® learned that the environmentally-conscious owner had already attempted to reuse effluent from the city’s sewage treatment plant, rather than drawing fresh water from the limited water reservoir. Tower Exclusions had previously installed a conventional media filtration system and attempted to filter the wastewater themselves.

Unfortunately, wastewater recycling efforts did not prove fruitful, as contaminants in the city’s effluent water quickly fouled the filter media, leaving the water dirty and unfit for use. Tower Exclusions asked WaterProfessionals® to assist in the development of a wastewater recycling system that would allow them to effectively treat the city’s effluent water and reuse it as rinse water and makeup water.

WaterProfessionals® consulted with the President of the company, offering ideas for wastewater recycling and conservation. The company required two different qualities of water for plant operation: 1) a low particulate water that was safe to use for general cleaning and rinsing applications; and 2) water low in dissolved solids for use as final rinse water and makeup water.

WaterProfessionals® collected samples of treated water from the city’s sewage treatment plant effluent and began developing a water treatment system that would filter the municipal wastewater to meet the company’s needs. A custom water treatment solution was developed that utilizes ultrafiltration as pretreatment to reverse osmosis technology. Combined, the systems are able to remove particulate, bacteriological, virus, cyst and dissolved solid contaminants from the sewage plant discharge.

Ultrafiltration was used to filter the water for general use purposes followed by reverse osmosis to treat water used for final rinsing and as makeup water. The integrated, highly automated, PLC- controlled ultrafilter and reverse osmosis systems were provided by WaterProfessionals®.

The ultrafilter can produce 125,000 gallons of filtered water per day. The filtered water is stored in one of two 20,000-gallon storage tanks until required for general plant use or pumped to the reverse osmosis machine for further filtration. The reverse osmosis machine is capable of filtering 72,000 gallons of water per day, with a 95-98% reduction in dissolved solids.

The custom fabricated wastewater treatment system by WaterProfessionals® will save up to 45-million gallons of water per year by recycling wastewater from the municipal sewage plant, rather than pulling water from an already strained reservoir. This system has removed the threat of the plant closing due to severe, sustained drought.